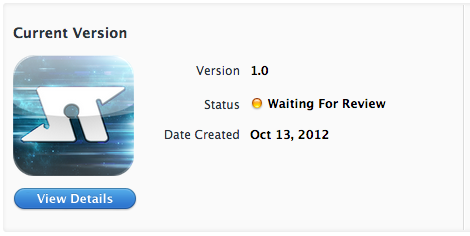 I submitted my first build to Apple last night!

It takes Apple a week or so to review each app and make sure it runs properly and conforms to their guidelines. In fact, according to this site, it looks like the average review time right now is 8 days. So if all goes well, Spaceteam should be ready for download on the App Store by next weekend.

The last two weeks have been pretty busy. Shortly after my last post, I upgraded my iPhone to iOS 6 and discovered a critical problem that forced me to delay the launch. When my iOS 6 phone connected to my iPad running iOS 5, the game would often just freeze and stop responding to input (specifically, it appeared to be a deadlock in Apple’s GameKit library). Now, my connection code has always been a bit flaky, so I took this opportunity to rewrite the network foundation and make it more robust.

I ended up ditching GameKit (for connections) and using two free libraries that helped a lot:

The show-stopping bug is now gone and I’m a lot more confident in the connection code.

During this time I also continued to tweak and polish, fixing these vitally important issues (among others):

*Actually a symbol for the planet Mercury, but you wouldn’t know it from everyone who’s ever tried to describe it.

Pretty soon I’ll write up a full post-mortem with things I learned, what went right and wrong, and so on. Stay tuned!