Just when I thought I was out, they pull me back in…

So in a somewhat surprising announcement, I just released Spaceteam for the new Apple TV!

I say surprising because a month ago I didn’t think this is what I’d be doing. I was interested in making a game with a large shared screen, but I wanted it to be something new, designed from the beginning with the TV in mind.

But then, a few weeks ago, I got contacted by Apple. They convinced me that Spaceteam would make a great couch co-op game for the new Apple TV launch. When Apple shows interest, it’s hard to say “no”. Potential benefits included:

So I dropped everything and spent the last four weeks crunching to redesign the game to work with a remote control.

Since it was for the new product launch I wasn’t supposed to talk about it which is why I’ve been quiet lately, but I’m finally finished and glad to be recovering and then back to my regularly scheduled programming. I missed the actual launch date by a few days, but it’s still early so hopefully I’ll make it into the next round of App Store features!

Here are the design ideas I went through trying to make it work:

Spaceteam doesn’t make sense as a single-player game so you still need one or more other devices to play, but an Apple TV with Wifi gives you pretty ideal conditions for getting a game connected and set up.

The Siri Remote lets you swipe up/down/left/right and “click”, so that’s what I had to work with. Dials don’t really make sense, and even simpler actions like pressing buttons feel different since they’re one step removed from directly touching a thing you can see. 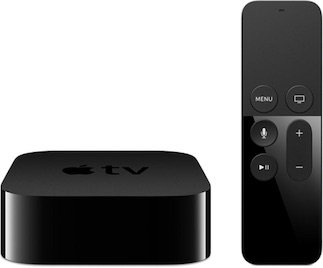 I wanted to experiment with a few different “game modes” for the TV player since I didn’t know what would be fun.

NOTE: I only had time to finish two of the new game modes in time for launch (Controller and Observer), but I did a bunch of work on some of the others so they’ll probably make it into an update soon. 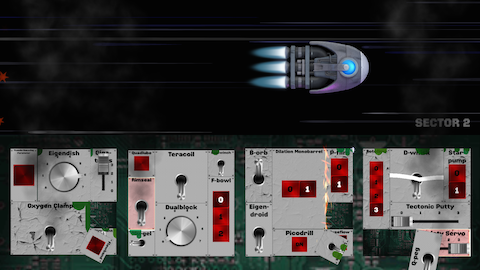 Observer mode: This was the most obvious use case to me. The TV shows an overview of the game (ie. a large viewscreen and everyone’s panels) but doesn’t actually control anything. Good for spectators at festivals, tournaments, etc. 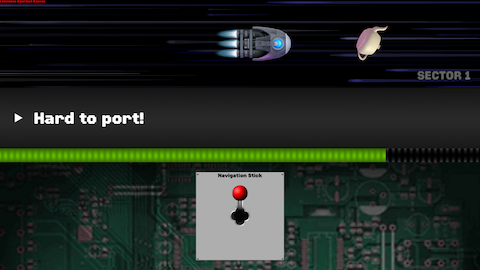 Navigator mode: TV gets a single navigation stick that can be swiped up, down, left, and right. It comes with special instructions “Hard to port!”, “Hard to starboard!”, “Pull up! Pull up!”, “Dive! Dive! Dive!” and new obstacles to avoid. Turns out the navigation control was just too boring to use so I cut it. But my artist G.P. made some cool new obstacles for this mode so I’ll find some other way of including them. 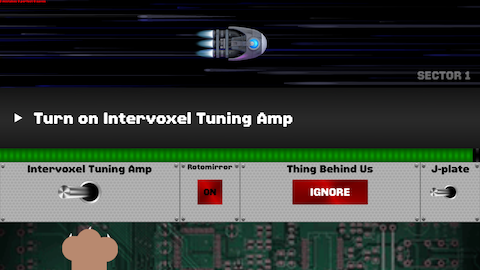 Controller mode: TV is just a regular player. They have a wide horizontal panel with simple push/toggle controls, operated by swiping a cursor left and right and clicking. This feels the most like classic Spaceteam and required the least amount of custom design, so I focused on this and included it as the default. 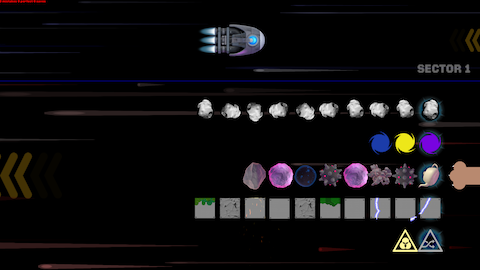 Thwarter mode: TV player is an antagonist who controls asteroids, wormholes, disasters, and anomalies. I first considered it as a non-cooperative mode but then realized it might be more interesting as a cooperative mode where the TV player had to carefully manage these disasters by preventing them, choosing the timing, or being forced to decide between them under pressure. I didn’t have time to finish it.

Cat Wrangler mode: TV controls the paw of the ship’s cat by swiping on the remote. The cat just gets in the way and makes it harder for the other players, but also has a goal of its own. I really want this to work and I still think it can somehow, but I didn’t have time to make it feel good for the first release.

Commander mode: TV gets ALL the instructions and others players only get controls. TV player does all the shouting :) This eliminates the two-way communication dynamic, but might still be fun. Didn’t have a chance to try it yet, but I’d like to.

Do you have any suggestions for how to incorporate the TV in an interesting way? Let me know!

While I was writing this post I had another idea for a mode with a massive control board on the TV, much too big for a phone screen. The players with phones would each have a “window” onto this board that could be moved around to get to the individual controls. Instructions would all be delivered on the TV. Players would have to coordinate which sections of the board to cover, either by themselves or with a dedicated “dispatcher”.

But I think some of these mechanics would be better served by a game designed up front for a TV player, instead of shoehorned into Spaceteam. So I’m going to save them for the co-op TV heist game I want to build!