I’ve been calling Spaceteam my “one month” project but it’s also an experiment to see how long it takes to make a simple game from start to finish. I expected my estimate to be a bit off, and I think that’s fine as long as I’m honest about how much time and effort it actually took. That’s why I want to document it here, so I can learn from it.

So far the time I’ve spent on it has been:

I’d like to have the game finished by the end of the month (September 30th). And by “finished” I mean submitted to the iTunes App Store (apparently the review/finalization process can take a couple of weeks). I think it’s a reasonable goal based on what’s left to do, and my rough schedule is as follows:

Now, let’s check back in three weeks to see how accurate I was! I’m sure I’ll run into some hurdles, but that’s the point of this project.

There’s enough of a game here already to play with other people and have fun. But there are a few things that I think the game needs to feel complete, and that don’t seem too extraneous:

I have lots of other ideas, but it looks like I’ll have to save them for a possible sequel!

This game needs sound. I think a few simple clicks, pings, buzzers, alarms, and crashes will go a long way to adding to the chaotic atmosphere and also providing feedback for your actions. Music wouldn’t work so well since everyone’s playback would be a little out of sync (and it doesn’t make sense for a game whose central mechanic involves shouting at each other).

One of the problems I’ve seen in playtests is that if a team is doing ok, but not great and not terribly, then the ship will pretty much stay in the middle of the screen and the level will just keep going until they eventually win or lose (or get bored). This can get tiring pretty quickly, so to fix it I’ve decided to add a pervasive “threat” of some kind (eg. an enemy ship, an exploding sun, a poison gas cloud, etc.) that gradually approaches the ship from behind if you take too long on a level (Thanks to Ben for the idea!). This will keep the pressure on and ensure that the level ends in a reasonable amount of time.

As you play, the levels get progressively harder, but there’s no real difference from one play session to the next (other than the people you’re playing with). I think adding a touch of variety will help make each session feel different, and encourage replayability. My current idea is to add a random event/condition every few levels, and I’ve come up with a few cheap ways I can do this: 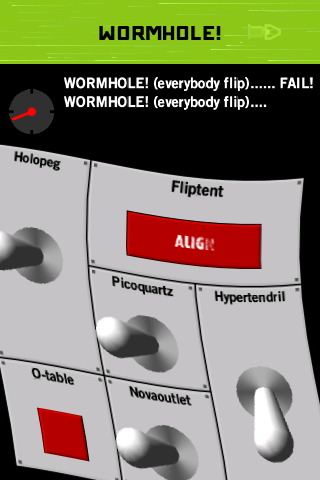 This one is a little unnecessary but I already did most of the work for it while prototyping so I’m going to add it anyway. Wormholes are an external hazard (like asteroids) that your team can avoid by flipping your iPhones upside-down. If you collide with the wormhole, it warps or twists your panels for a certain amount of time and—like most effects in the game—makes it harder to operate the controls. If you survive there may also be a beneficial effect (like skipping a level, for example) but I need to test this to see how well it works. Having an upside means you’ll have to make a quick decision about whether to avoid the wormhole or intentionally go through it, and I like the added chaos that choice introduces. 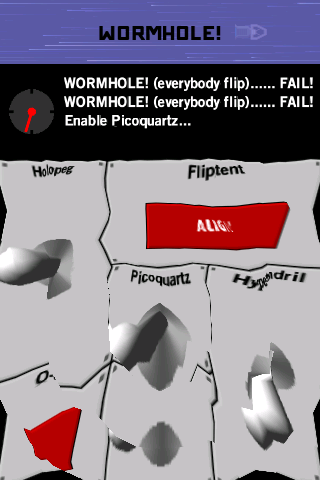 If anybody has any advice or suggestions, please let me know! Feel free to comment below or reply to me privately if you prefer.