I’m going to start by making some iOS games. I have several Apple devices for testing and making mobile games will force me to keep my scope manageable (I tend to get over-ambitious). I also just like touching things, so the touchscreen is going to be an important part of my games.

The project I’m most excited about right now is inspired by Galaxy Trucker (the board game), Star Control II, Escape Velocity), and a dash of Google Earth. It’s a 2D space exploration game centred around building (and rebuilding) a spaceship from simple blocks. You drag and snap together modules representing thrusters, cargo holds, lasers, sensors, tow cables, solar panels, robot arms, etc. each affecting your ship’s capabilities. Then you zoom off and explore a (fictional) galaxy, meet aliens, discover exotic nebulae, dodge asteroids, and inevitably get into a heap of trouble and rebuild your ship according to the situation at hand. I call it Shipshape.

There are a bunch of space games for iOS already, but they all seem to have intimidating UIs with lots of menus, and are mostly in 3D (which adds additional complexity). I want a game that’s easy to understand and play, with a strong focus on touch input that feels right. That means no virtual joysticks, for example :)

However, Shipshape is pretty ambitious, so as a practice run to get a feel for the process of creating an iOS game I’ve decided to start with a much smaller project that I can finish in one or two months.

It will let me make mistakes on a small scale, teach me how to estimate tasks on my new work schedule and hopefully be a good stepping stone to Shipshape.

Spaceteam is a local multiplayer co-op iOS game where you shout nerdy things at each other for a couple of minutes before you all die. At least that’s what it sounds like to people watching.

So… you’re in a spaceship and you each have a randomly generated control panel with buttons, switches, sliders, and dials. You need to follow time-sensitive instructions being fed to you by the ship’s autopilot. However, the instructions usually refer to controls on someone else’s screen, so you have to shout the instruction to them before the time runs out. Meanwhile they’re doing the same to you. Oh, and the ship is falling apart. 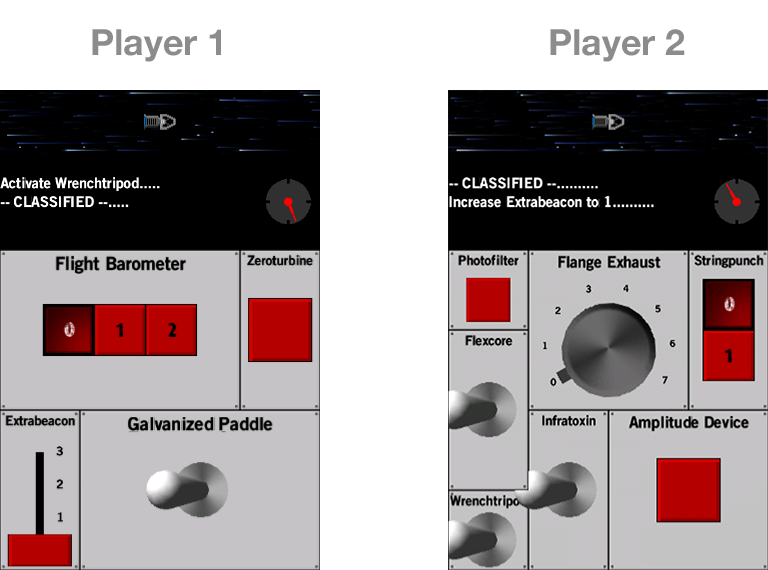 I still have lots of balance and polishing to do, but the prototype is already pretty chaotic and fun. It currently supports up to 4 players, but there’s no reason it couldn’t stretch to more (except for sanity, and probably network issues).

I have lots of ideas for directions to take this mechanic in, but this project is an exercise in keeping scope small so I’m trying not to add more than absolutely necessary.

Remember to work together… as a SPACETEAM! 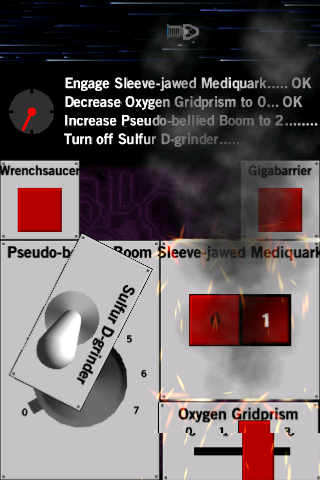 This player is in a spot of bother.