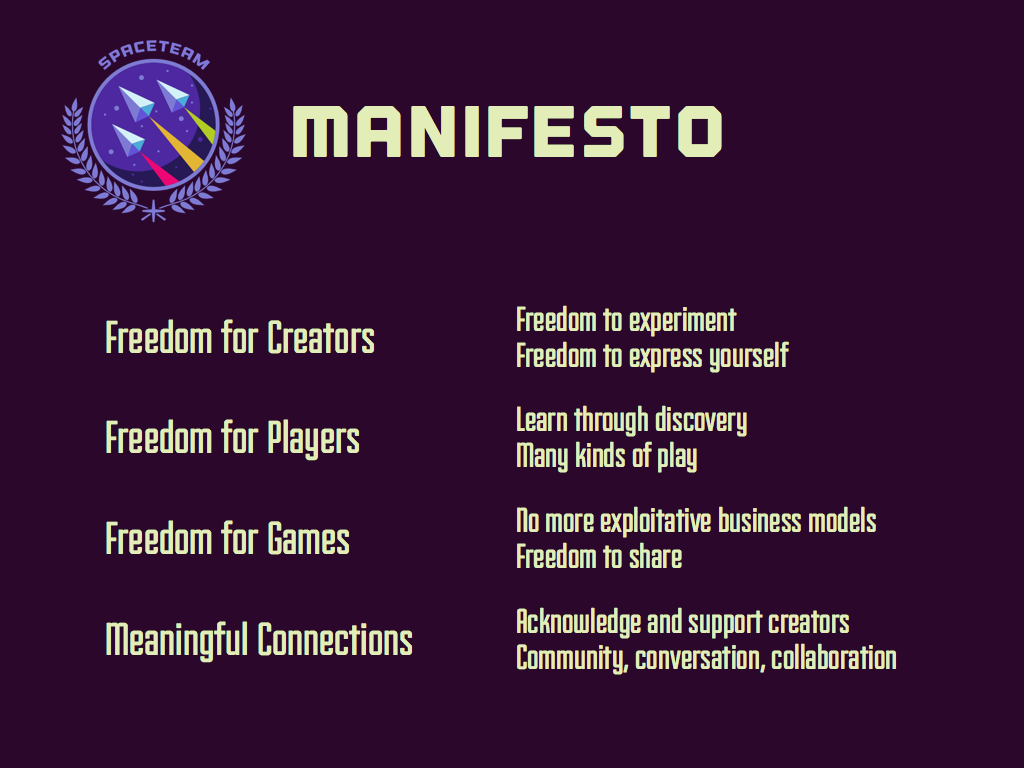 I just came back from the A MAZE. festival in Berlin where I gave a talk about the vision I have for the future of indie games. I called it a “manifesto” and it’s also the philosophy behind my new Kickstarter campaign, the Spaceteam Admiral’s Club.

I want to explain it in more detail here. It’s still a work in progress so I’d love to get your feedback on it.

So far I have four key pillars, with a couple more to come. Each addresses a problem that I see in the game industry today:

Freedom for Creators is a response to the problem of existing business models forcing creators to make compromises for the sake of selling their game to the mass market.

When exploring new game ideas creators need the freedom to experiment, to iterate, to fail, to throw things out and start over. This is an essential part of game design, or indeed any creative process. It’s hard to predict what will happen and the end result might be quite different from what we expected.

This requires time and flexibility. If we commit too early to a specific idea then the final product may suffer. This is why I wanted the Kickstarter campaign to focus on the process instead of the product.

Freedom for Creators is also the freedom to make the game you want to make. If you’re constantly worrying about whether it will appeal to enough people, or if it’s too weird, or which pieces you can sell and how much to sell them for, then you’re not focusing on the game. Creators should be free to express themselves honestly. To add the silly personal touches. To make the Director’s Cut.

Freedom for Players is a response to a more personal problem. I see many games that are too prescriptive, that insist on holding the player’s hand, and that limit the actual experience of “play”.

Freedom for Players takes several forms. The first is being free of the artificial restrictions imposed by (often exploitative) business models that shut off parts of the game until you pay for them. When we encounter a “paywall” like this we often react with resistance rather than acceptance, which is bad for players and creators.

But Freedom for Players encompasses more than this. Players should be free to explore, experiment, and discover the game in a natural way when far too often they’re just presented with a block of text, or a tutorial, telling them exactly what to do. This isn’t playing. In Spaceteam, I intentionally don’t tell players that they can wipe away the slime or fix the dangling panels, because when they organically discover this by themselves it’s a great moment of realization and possibility.

There are many ways to play within a game. Another way that has personal significance to me is when a game offers an editor for customizing the rules or content. It might not work for every game, but when it works well it not only lets players play with the game in a whole new way, it might also inspire them to make games and experiences of their own. To become creators.

Freedom for Games goes hand-in-hand with Freedom for Creators as a solution to the compromises being made by creators when choosing which parts of their game to sell and how much to sell them for.

I expect this to be the most controversial idea here because what I’m referring to is digital games being completely free of charge.

Game prices are totally artificial. We expect to pay $30 or more for a digital game on one platform but only $1 for essentially the same game on the iPhone. The games themselves are easy to copy and distribute, so we have to artificially restrict them with “digital rights management” and “copy protection”. We try to stop people from sharing and enjoying our games for fear of “piracy”. We set a single, arbitrary price that has little to do with the creation process. This price will be wrong for lots of people who are either not willing to pay it, or willing to pay more. None of these things make sense.

Digital games should be free.

It’s important to note that I’m explicitly not trying to devalue games here, I’m trying to _re-_value and promote creators themselves and the time they spend creating. Creators still need to be paid. Every act of creation is valuable and it’s often impossible to measure what its final impact will be. We need to support the experiments and failures as well as the successes, not just because the experiments and failures are an essential part of the successes but because they are valuable in themselves.

Traditional game companies need this creative freedom too, but they usually have to pay for it with sales of at least one “mega-hit” game that covers the production expenses and also the experimenting and aborted prototypes. Since nobody can predict what will become a hit or how long it will take, they can’t afford to take those risks and this results in all the sequels, licenses, and derivative formulaic games we see today.

I don’t know yet what the ideal solution is for paying creators, and I’m sure there will be many solutions, but the one I’m trying is patronage through my Kickstarter campaign. I like the pay-what-you-can model and I like the community that forms around it. If I can be sustainable like this then I hope to never charge for my games again :)

Meaningful Connections is a response to the problem that many players don’t know or care that the games they play are made by actual human beings.

The connections I’m talking about are the things I describe in my Spaceteam Retrospective: the personal letters and stories; the fan-created art, films, comics, writing, and costumes; the inspired projects; the conversations and collaborations that result when people realize that you’re a person and not just a manufacturing pipeline or faceless corporation.

A meaningful connection is the difference between someone paying $5 for a game, playing it once and deleting it, and someone contributing $5 to support your game development because they believe in you. You get the money in both cases but they are clearly different.

And these meaningful connections are much easier to make when people are connecting with your game instead of your business model.

To summarize, these are the principles on which I’m basing the Kickstarter campaign and my development philosophy going forward:

Over time I’ll be adding to the manifesto and refining it, but for now I hope this gives you a better sense of why this project is important to me and how I hope it can help create more innovation and diversity in the game industry.