Educational variant Spaceteam ESL and its French counterpart Astronautes FLS are getting a new feature: Speech Recognition! Now you can get immediate feedback on your pronunciation in Practice mode. I'm using Google Speech-to-Text API which is more appropriate for understanding what you mean rather than exact pronunciation so it's not perfect for our needs but it's close enough. The new versions are in review and should be ready for the new school year on September 3rd. 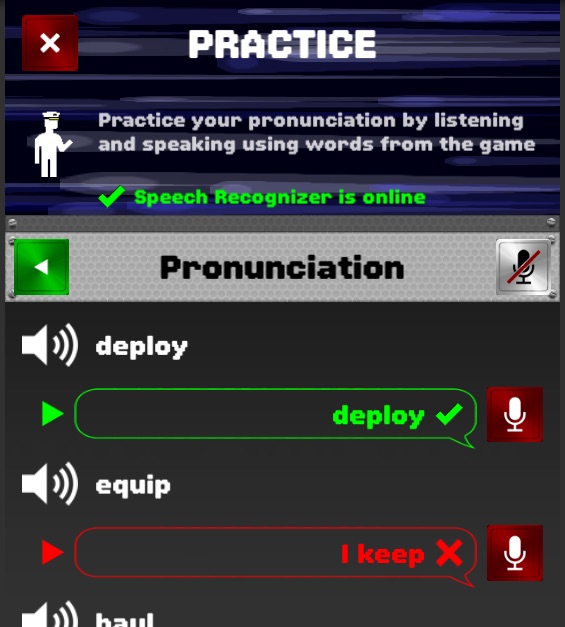 I paid for a good official Chinese translation in the hopes of launching in China on Android sometime soon. This is actually a complicated procedure requiring special permission from the Chinese government, documents, fees, and working with a Chinese partner. Google Play is not allowed in China so instead you have to distribute your app or game on various other competing app stores. There are dozens of these stores, each with their own terms and policies, so it's much easier to work with someone else to handle the distribution.

I'm still investigating the best way to make it happen but it seems like I shouldn't just ignore such a big potential audience!

I am in violation... of something

When I uploaded my latest beta version to Google I got an unexpected message back that I was violating their Payments policy. Apparently it has to do with linking to my Patreon inside the app (it allows people to "donate" to me outside Google Play which I guess they don't like) but after asking for clarification it's still not clear what I can do to fix it. The app has been this way for a looong time. I've resubmitted without a clickable link (now it just says "Learn more at: spaceteamadmirals.club"). Hopefully that's good enough.

I finally decided to outsource the one part of my job that I like the least: network programming. I'm working with a local company called Triple Boris to upgrade my CaptainsMess networking library. It will make Spaceteam and Blabyrinth networking more reliable and, since it's open source, hopefully others will be able to benefit from it too!

The first task I've given them is to build a custom Android Bluetooth plugin. I was previously using one from the Asset Store, but it cost money and is no longer supported. CaptainsMess will soon have built-in support for Bluetooth on iOS and Android without relying on external code (still not cross-platform though).

The latest Blabyrinth showing was at Montreal ComicCon in July. Here's Phil (my musician) at the booth with some random players. Our booth was a bit boring so on the second day we brought some puzzle props and Phil's partner Linda made us a great "Escape The Room!" sign to make it more obvious what the game is about. This attracted a lot more escape room fans (and designers!) so I'm going to bring it to other events too. 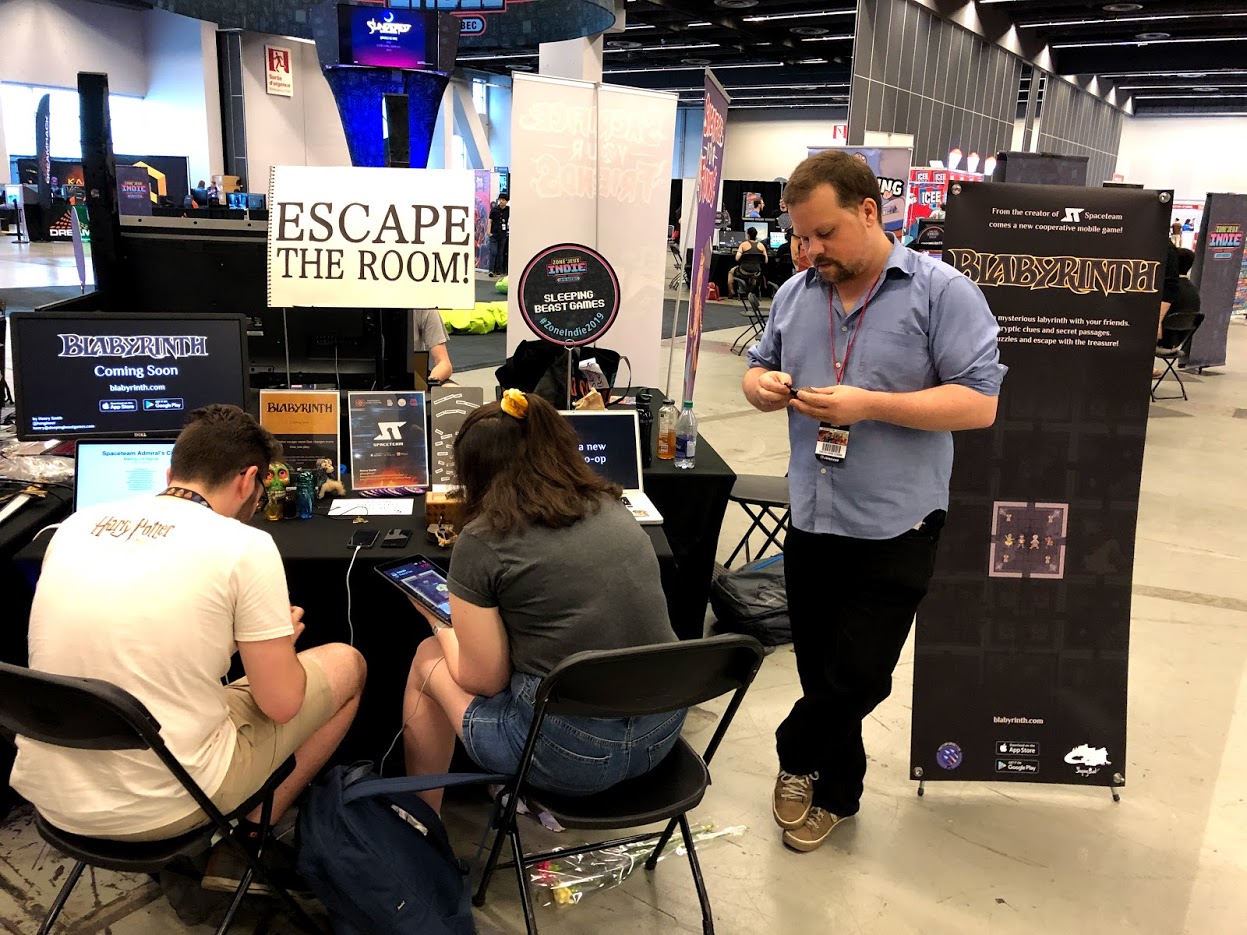 From watching people play the demo it's clear that I need a good way to teach the basic interactions like swiping, pinching, and dragging. When I introduce the game I still feel compelled to explain to people how to zoom in to look for clues and pick up items. So I've been working on making the game teach itself using just the right amount of hinting. 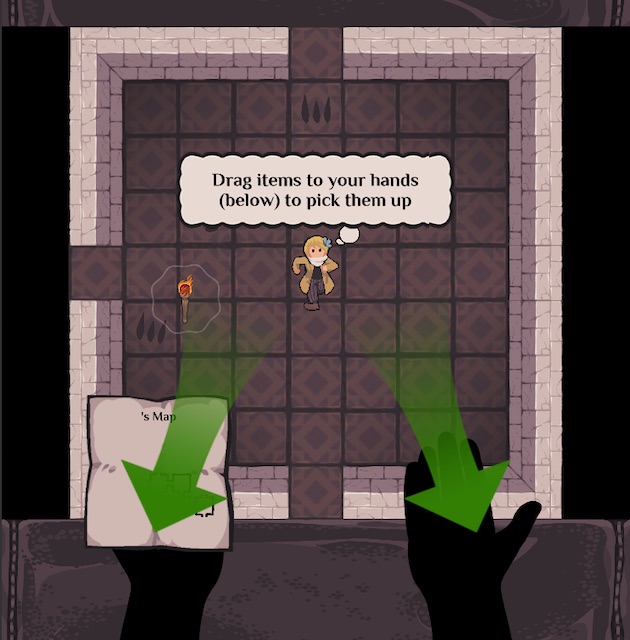 I'm still waiting to open the floodgates on new puzzle types until the game is more stable but I've been adding a few here and there. Here are some previews: 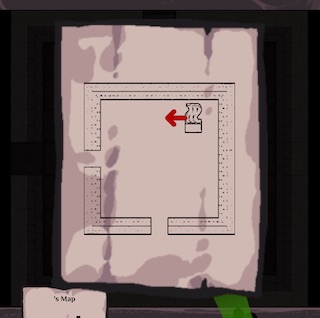 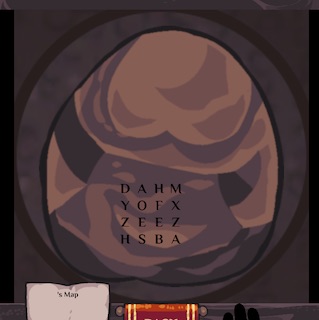 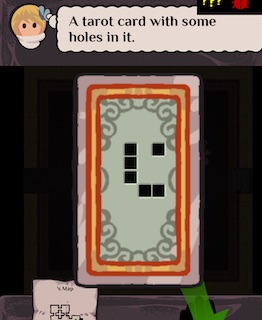 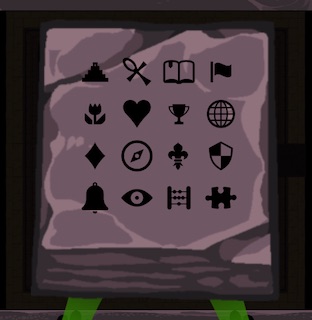 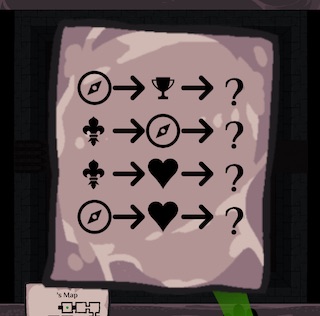 I don't want to spoil anything about the meta-game but suffice it to say I've been connecting things together so that everything will work if you decide to seek out the additional challenges hidden throughout the game. The labyrinth is not what it appears!

Next stop for Blabyrinth... XOXO Festival in Portland, Oregon (unofficially) 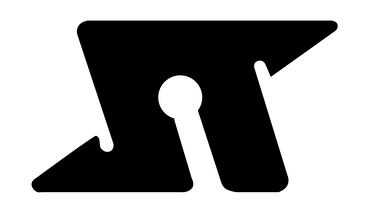 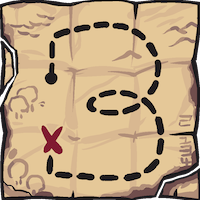 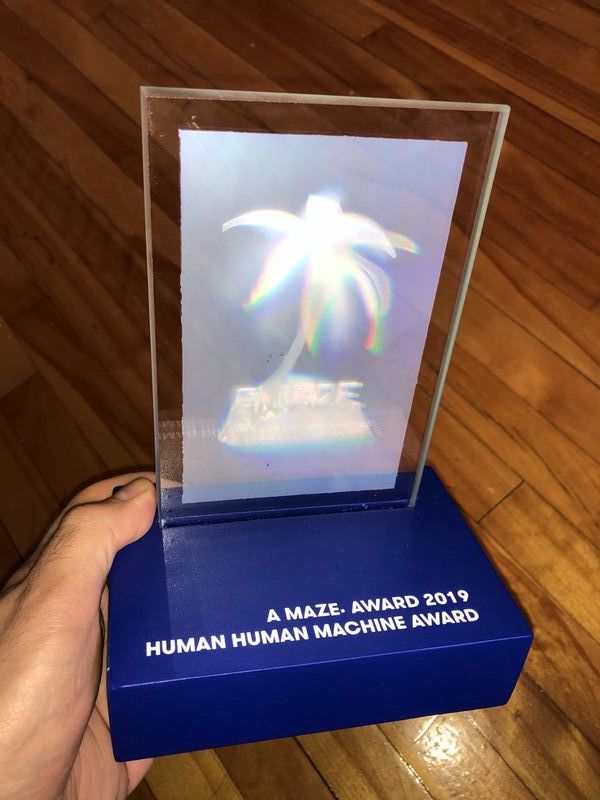 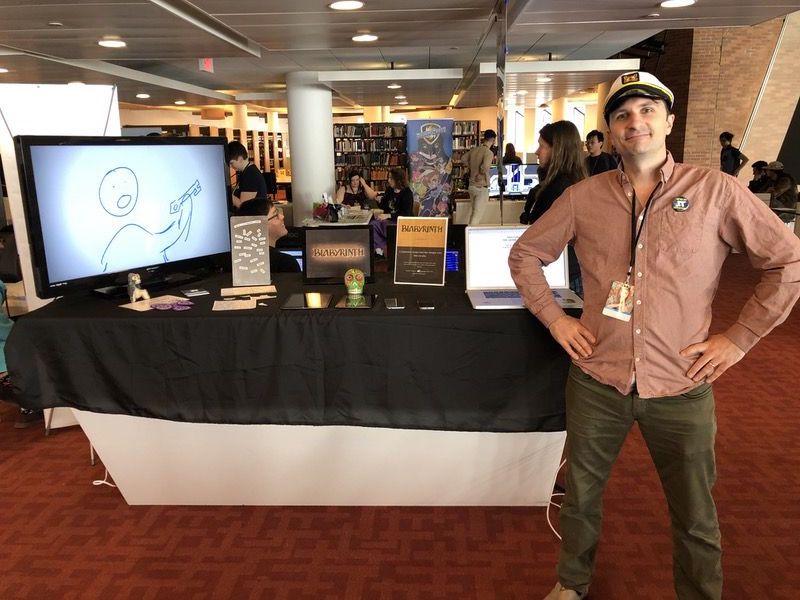 When we last spoke I was preparing to show Blabyrinth at DemoNight here in Montreal. It didn't go perfectly: the music didn't work and there was confusing video lag between the two devices, but it was a good learning experience. 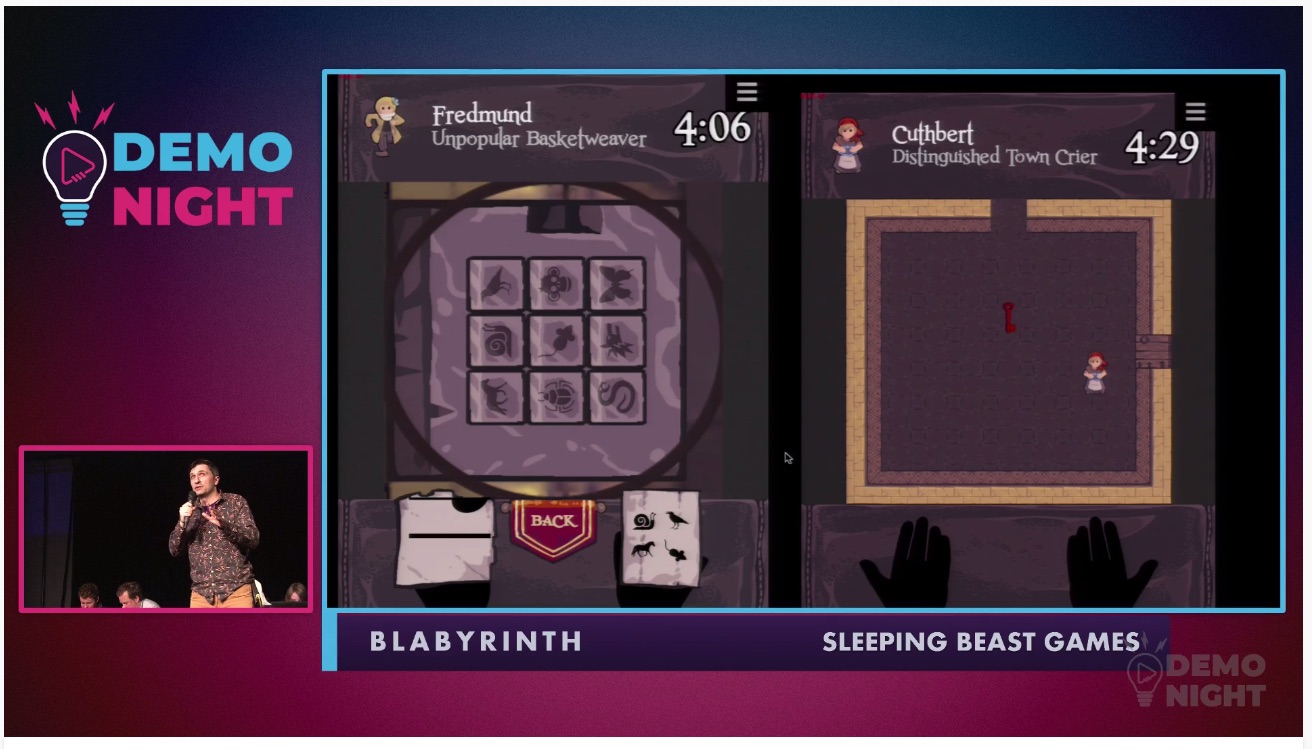 It's tricky to present a game like this on stage because I need at least two video streams, and preferably four (one for each player). I've tried it before by streaming each device wirelessly to my laptop using an app like Reflector but I've had problems with lag before. This time I connected one device with a cable through Quicktime Player > "New Movie Recording..." and streamed the other one over wifi (Quicktime can't show two devices for some reason). But there was still lag, probably due to interference from so many other devices in one space. At one point the streamed video was 20 seconds behind the hard-wired one, which made the actions very difficult to follow.

Next time I present I'll try to avoid wireless streaming entirely. If anyone has tips on how to show four iPads on one screen I'd love to hear them.

State of the Game

I realize that I haven't actually shown much of the game in action so here's a video playthrough of a random level showing what the latest build looks like: 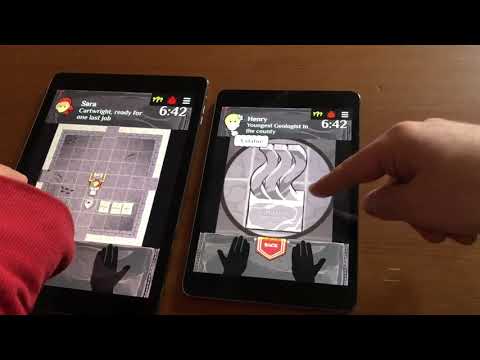 I traveled to London for a week in February and, despite no longer having an official reason for going (the Digital Culture Awards was rescheduled for April at the last minute), I still had a great trip. Since I had no more Spaceteam obligations I spent the whole week working with my artist Sam, running Blabyrinth playtests, and hanging out with escape room folks.

I had some great brainstorming sessions with Sam and my host Ed. We came up with some UI improvements and I've started experimenting with two new features/mechanics: light & darkness, and personal minimaps.

Puzzles involving light and darkness were always on my wishlist but I hadn't planned to implement them for version 1.0.

But darkness came up as a solution for keeping people together in a group. Something that happens a lot in playtests is that as soon as the team drops into the level everyone runs off in different directions. So the idea I'm exploring is to make the level completely dark and give one player a torch so they have to stick together in the beginning... until they find additional torches throughout the level at which point they can start splitting off.

It might be overkill for the entire level to be dark, so I'll probably just have a few dark rooms, but it's a useful tool to have in the box. 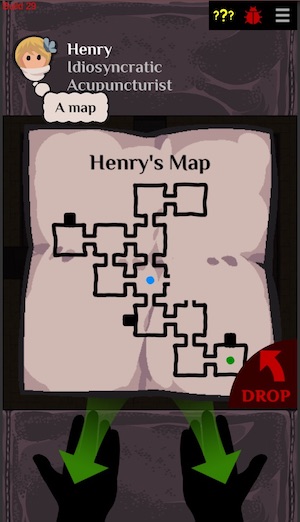 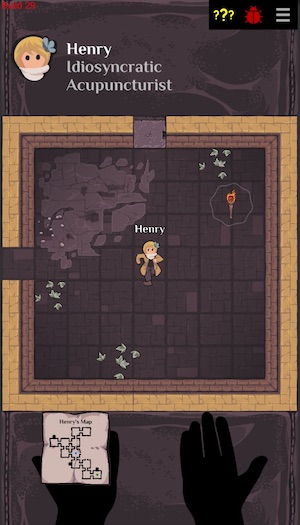 I was planning to include a "magic", auto-updating, level map as a special item or reward, but now I'm considering making them a default feature to make navigation easier. At the moment it's very easy to get lost in the labyrinth because the rooms all look very similar, and the way I previously solved this was to add player "shouts" (which you can see in an earlier blog post). But one of the insights from the brainstorm (thanks Ed!) was that while this helps players find each other, it doesn't encourage them to talk to each other. Once you see the shout callout on the screen, you can start heading in that direction without any further interaction. But if instead you can see both of your locations on a map, you can guide your teammate to you by describing the route.

It was a welcome reminder that I should always be prioritizing face-to-face interation when trying to solve game design problems.

Another interesting side-effect of carrying a map around with you is that it takes up an inventory slot that could be used for something else. So you have to make a choice about whether to keep the map or drop it to carry more stuff!

I had tickets to GDC in San Francisco but unfortunately I got sick the week before and had to cancel the whole trip :( I'll be there next year for sure.

...then we take Berlin

Next month my travels take me to Berlin for the A MAZE. festival. Blabyrinth is nominated for an award and I'll be showing the game there in person. Maybe I'll see some of you there!